Medium Density Residential Standards - what the?

In my previous blog I outlined the main components of the Resource Management (Enabling Housing Supply and Other Matters) Amendment Bill being promoted by the Government with the support of the National party.

In this blog, I look at the Medium Density Residential Standards (“MDRS”) proposed in that Bill – what are they, what difference will they make in Auckland, and will they impact the quality of environment in our urban areas?

What are the new Medium Density Residential Standards?

The MDRS include the following:

The headline feature of the MDRS is that they will permit up to three residential units up to three storeys high to be constructed as a permitted activity (i.e. without resource consent) in all urban residential zones.

The MDRS will also restrict the notification of applications for residential developments, potentially speeding up and reducing the cost of the resource consent process where more than three units are proposed or the units do not comply with the building standards specified in the Bill.  In this regard:


What are the new building standards under the MDRS?

The building standards specified in the Bill are summarised in the table below.

Edit: Some of the standards in the table above were changed following introduction of the Bill.  See our update here.


What difference will the MDRS make in Auckland?

The impact of the MDRS will differ from one zone to the next.

The MDRS will not apply in the Large Lot zone.

Landowners in the SH zone will gain the ability to construct up to three residential units (complying with the building standards in the Bill) without resource consent.

In addition, nearly all of the standards in the zone will be replaced with more permissive standards.  This will significantly increase the intensity of development enabled in the SH zone.

This might prompt Council to re-zone most of the properties in the zone (i.e. all properties not affected by an overlay relating to a “qualifying matter” that justifies restricting development below that enabled by the MDRS).

The development of up to three residential units is already permitted in the MHS zone so the Bill does not change anything in that respect.

However, nearly all of the standards in the MHS zone will be replaced with more permissive standards.  This will significantly increase the intensity of development enabled in the MHS zone.

This might prompt Council to merge the zone with the MHU zone (as there will be little or no difference between the MHS and MHU zones following incorporation of the MDRS).

The development of up to three residential units is already permitted in the MHU zone so the Bill does not change anything in that respect.

In addition, the building standards in the Bill have been modelled on and closely resemble the standards for the MHU zone so the intensity enabled in the zone will not significantly change.

Nevertheless, the MHU zone will gain more permissive height in relation to boundary, building coverage, outdoor living space and outlook space standards, so the Bill will increase the intensity of development enabled in the zone to some extent.

The THAB zone will gain the ability to construct up to three residential units (complying with the building standards in the Bill) without resource consent.

Overall, the Bill will make it easier to undertake smaller developments (up to three units up to three storeys high) within the THAB zone but will not make a difference to larger developments.  This will be helpful for the owners of smaller sites in the zone caught by the current requirement for consent for any and all residential development but unable to make full use of the development potential enabled in the THAB zone.


Where is development likely to go once the MDRS take effect?

Proponents of the Bill argue that the MDRS will have their greatest impact in residential areas close to city and metropolitan centres because those areas are the most in-demand for housing and have historically been the most protected from development through the combination of low density (e.g. Single House) zoning and special character overlays.

That being the case, the MDRS could reduce development uptake in more strategically located areas and make it harder to plan for infrastructure upgrades, as intensification will be enabled throughout the urban area rather than focused in specific areas.


Will these changes impact the quality of our urban environments?

It’s important to acknowledge that environmental quality is highly subjective.

Nevertheless, the changes proposed in the Bill do have the potential to impact on the quality of our urban environments.

Primarily, this is because the changes will permit developments of up to three residential units complying with the MDRS without resource consent.

This has the potential to bring about significant change within areas currently zoned Single House, without any assessment or mediation through the resource consent process.

As noted above, a developer can already build up to three residential units in the MHS and MHU zones without resource consent if they comply with the standards for the zone so in that respect the Bill does not depart from the Unitary Plan approach in those zones.

That being the case, the absence of an ability for councils to influence site layout and building design is more significant under the Bill than it has been under the Unitary Plan to date and will put a much greater onus on architects working for developers to strive for and insist on good urban design to offset the absence of Council as a backstop to poor design and amenity outcomes.  Inevitably some will fail to do so, and because building and environmental quality is subjective, some architects will think they’ve done so while others will disagree.

The following diagrams prepared by Auckland Council illustrate the differences in bulk and separation permitted under the current Unitary Plan zones and the MDRS.  You can see that the MDRS allow much more bulk relative to adjoining properties.  This creates the potential not only for more intensive development but also visual dominance and much greater loss of sun, views and privacy than permitted under the current plan provisions.  Added to that, the combination of greater bulk and poor/ugly design has the potential for a more significant adverse effect on the streetscape and amenity than under the current plan provisions. 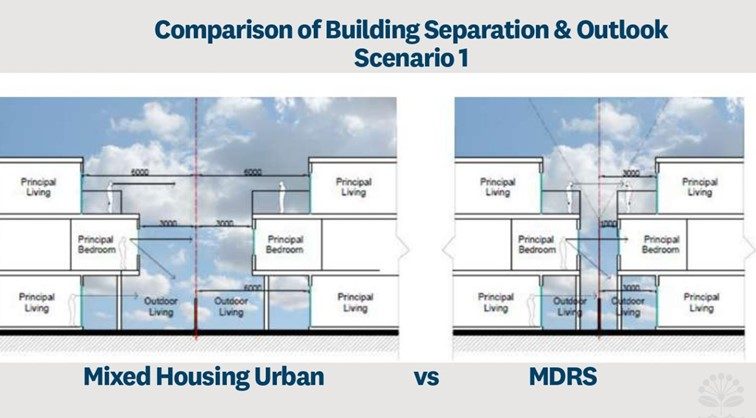 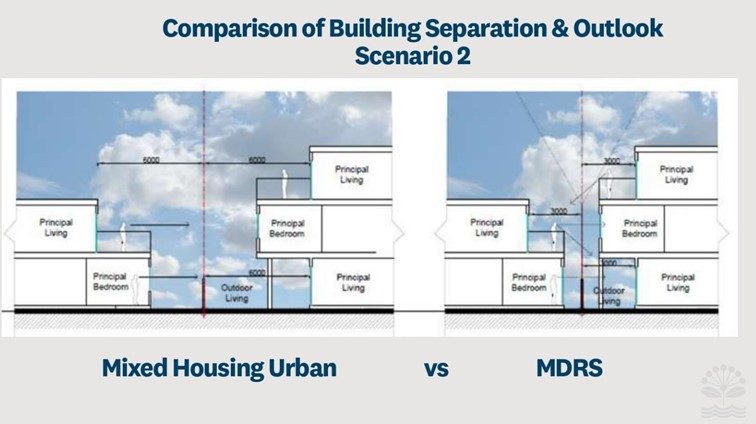 Feel free to get in touch if you would like any advice re the application of the building standards to an upcoming development.