The Government is seeking feedback on a proposal to facilitate the creation of urban development authorities (“UDAs”).

UDAs have been used overseas to facilitate large scale and (relatively) rapid redevelopment of urban areas, including the London Docklands and Bangaroo in Sydney.

(This is a long blog - feel free to download a copy for printing and reading at your leisure).

Why – What’s the Problem?

The Government has identified the following key issues within our existing urban areas and formed the view that the existing legal and planning frameworks do not permit the scale or speed of change required to address the identified issues in a timely way:

3. Sustained low housing supply resulting in a significant and growing shortage of housing that will take years to overcome.

5. A need for new tools to promote vibrant and liveable cities to attract communities of skilled workers.

6. A need to facilitate the redevelopment of urban centres currently in decline.

The Government proposes to enact legislation providing for the creation of UDAs with a range of powers to facilitate and undertake urban development.

The Government proposes a very broad definition of “urban development” but does not propose to limit the use of the legislation to urban areas.

In other words, the proposal as it currently stands is to facilitate urban developments wherever they may be proposed, including in greenfield areas.

The intent, however, is that the legislation be used only for large-scale and strategically important developments.

The proposed legislation gives the Government the power to:

2. Set the strategic objectives for the project;

3. Select which of the development powers that project can access;

4. Determine who can exercise the development powers for that project (i.e. who the UDA will be); and

5. Determine who is accountable for delivering that development project’s strategic objectives (this could be the UDA, a private entity, or a public-private partnership).

The primary objective of the UDA will be to realise the development project’s strategic objectives in accordance with an approved development plan.

UDAs will have standard corporate powers to purchase land by agreement from landowners within the development project area, and to sell it for development.

UDAs will also be able to ask the Minister for Land Information to consider exercising existing powers of compulsory acquisition under the Public Works Act 1981.

1. A power to require local authorities and council controlled organisations, district health boards and Crown entities (e.g. Housing NZ) to transfer land that they own within a development project area to the Crown for transfer to the public entity responsible for leading the development project.

2. A power for the UDA to remove any legal encumbrances from land within the development project area, such as easements and covenants.

3. A power for the UDA to subdivide and re-subdivide land, and consolidate land that it owns within the development project area, in a more streamlined way.

4. A power for UDA’s to change some reserve classifications, adopt, amend or replace reserve management plans, and cancel, suspend, create or amend bylaws relating to reserves.

The Government is proposing a two-stage process for establishing urban development projects, comprising:

1. The initial assessment and establishment of the project;

2. The preparation and approval of a “development plan” for the project.

Both central government and territorial authorities will be able to initiate the process and veto any particular project.

The process proposed for assessing an urban development project is set out in the diagram below (click here to download the diagram). 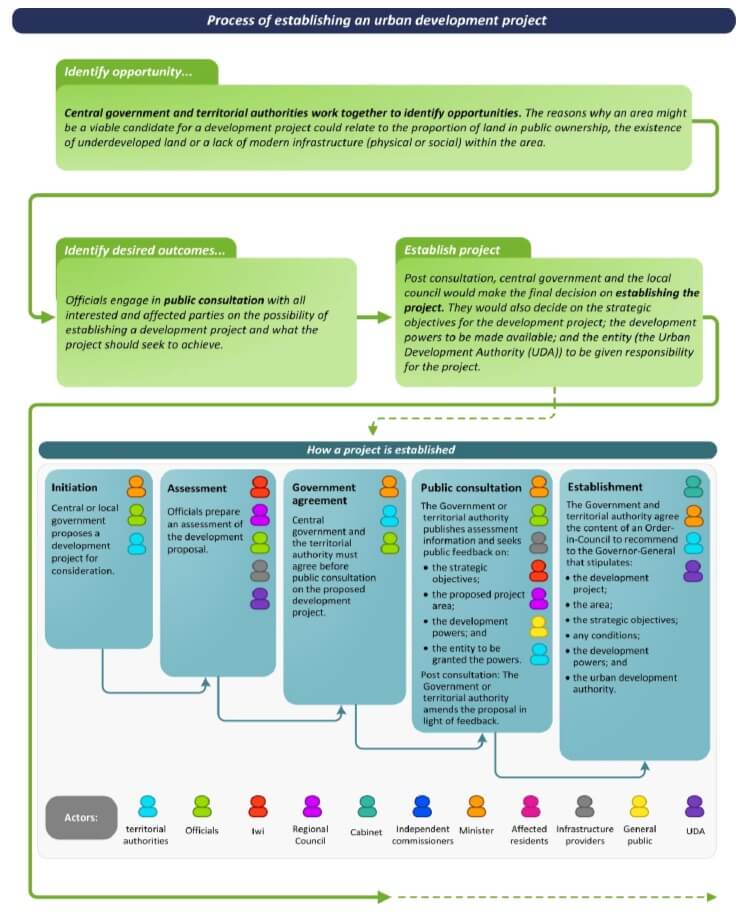 As part of this process, the public will have the opportunity to submit on:

1. The boundaries of the proposed project area;

2. The strategic objectives of the project, including any public good outcomes the Government might require as a condition of development;

3. The entity that will be accountable for delivering the strategic objectives (which may or may not be the UDA);

4. The development powers that government proposes to grant to achieve the strategic objectives;

5. The UDA that will be granted those powers.

Once the project is established, the UDA must develop and publish a draft development plan (see discussion below).

Importantly, during the period after a development project has been established and before the development plan takes effect, local councils will need to notify the UDA of any resource consents applied for within the project area and the UDA will be able to veto or impose conditions on consent.

The process for preparing a development plan is set out in the diagram below (click here to download the diagram). 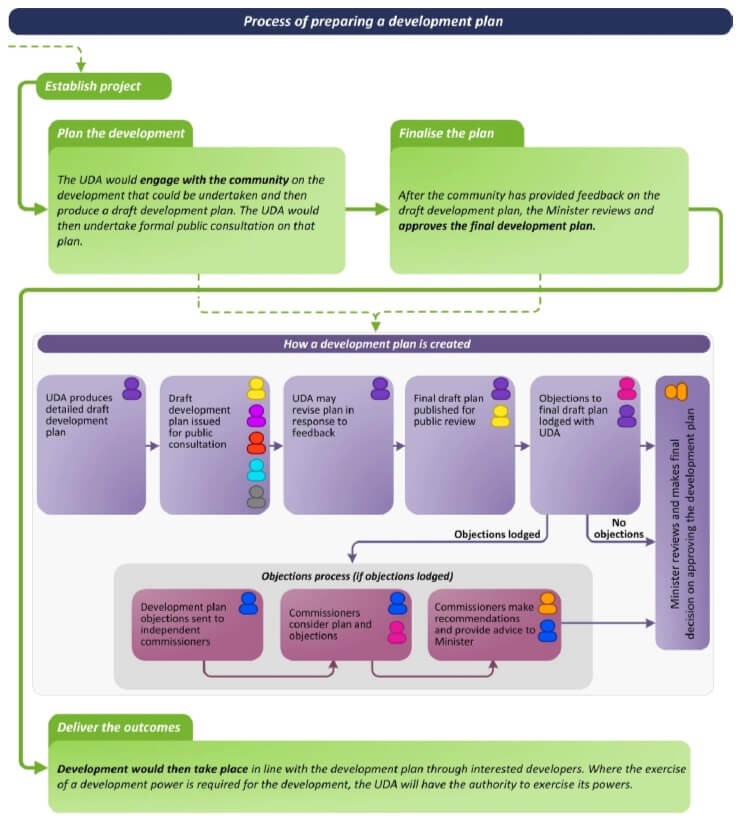 The development plan must (amongst other things):

1. State the strategic objectives set by the Government for the development project;

2. Identify how the development powers are proposed to be exercised (e.g. the nature of any new land use regulations);

4. State the infrastructure charges and development contributions that it anticipates will be levied on landowners and developers;

5. Identify any further development powers that the UDA has not been granted but proposes to apply for; and

6. Include an assessment of effects on the environment.

It is proposed that:

1. Directly affected parties will be able to submit on the draft plan.

2. Where objections are received, the plan will be reviewed by independent commissioners who may at their discretion request further information from the UDA, the objector or an independent technical expert and/or hold an informal hearing.

3. The Commissioners will then make a recommendation to the Minister, who will then decide on the plan. The Minister’s decision will be final and not subject to appeal.

We note that a development plan may override the regional policy statement, regional plan and district plan that would otherwise apply to the development project.

Once a development plan is in place:

1. The relevant territorial authority and regional council must have regard to the plan when reviewing their policy statements and plans.

2. The authority responsible for assessing development applications will be required to have regard to the following matters when assessing such applications, giving weight to them in the order listed:

a. The strategic objectives of the development project;

b. Part 2 of the RMA (purpose and principles of the Act); and

Development applications will need to include an assessment of environmental effects but will, for the most part, be processed on a non-notified basis.

The Discussion Document proposes reduced timeframes for the processing of applications under a development plan, relative to normal RMA timeframes. The proposed timeframes will be very challenging given the likely scale of projects.

The Government’s discussion document can be downloaded from our website by clicking on this link.

Feedback can be emailed to UDAConsult@mbie.govt.nz or provided via the MBIE website from late February. Feedback must be submitted by 5pm on 19 May 2017.

Please feel free to contact us if you would like any assistance in reviewing the discussion document or preparing a submission.